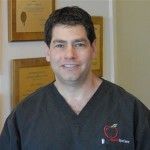 Dr.   Applebaum was born in Miami, Florida and has been a resident of El Paso, Texas since 1978.   He received his Doctorate of Optometry from the University of Houston in 1993 and his Bachelor of Science from the University of Texas at El Paso in 1988.  Dr.   Applebaum started his practice adjacent to the Wal-Mart by Cielo Vista Mall in 1994.  After several years next to Wal-Mart, he decided to open Apple Eye Care in 1999.

We will do our best to accommodate your busy schedule.   Request an appointment today!

Accessibility by WAH
Call Us Text Us